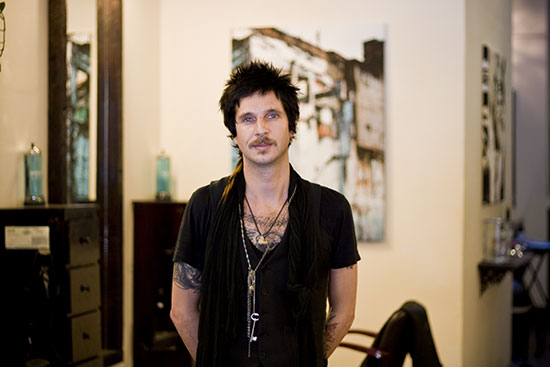 My first thought on walking into Salon Pure on a warm recent Wednesday evening was, “How have I never noticed this place before?”

Just down the street from the newly opened New York transplant Babycakes and across the street from Cole’s French Dip, the salon is tucked in to an unassuming little storefront on Sixth Street in Downtown’s burgeoning Arts District.

Handsome but discreet, the space was once home to a 24-hour barbershop that, like most of Downtown, had more or less gone to seed until its current inhabitants took it over. Opening the door, those barbershop roots are immediately felt in its network of exposed brass pipes that crisscross the ceiling, rich dark wood, and the old-fashioned Tiffany lamp hanging just above the door. Owner Rick Renoir’s family is from New Orleans, and the space, with its dark leather chairs, hanging plants, wrought iron banisters on the staircase, and fleur-de-lis, very much reflects that city’s warmth and laid-back parlor elegance. There is none of that hard-edged modern design typically found in a trendy salon.

Though the salon has been open since 2007, it has managed mostly to fly under the radar, building up a steady clientele through word of mouth and the increasing viability of Downtown as a destination for luxury goods and services. Their purported mission is to provide the kind of quality services that a person might expect to find at a Westside salon, with a Downtown edge. And they seem to be pulling it off. It is decidedly not pretentious or stuffy here, and while all of the stylists are attractive and on trend, there is no unnecessary attitude. Everyone seems genuinely nice, helpful, and interested.

After changing into a little black salon kimono, my two stylists sit me down to talk hair – specifically, my hair. I can tell from their questions and attention that they take this process seriously. Eugene Park, a sweet-faced 28-year-old with sea-foam green hair and black plastic glasses, is my colorist, and he gets to work right away. After a luxurious washing with Bumble and Bumble products, which the salon features, he coats my medium-length hair with thick goo and puts it under a dryer.